Time has given the building an air of gravitas, and it bears its age well. I’ve survived this long, it seems to say. They’ve sacked and burned me, but I’m still here. Gamle Aker kirke, the Old Aker Church. The information board by the gate tells us that it was built in the twelfth century and that it is the oldest extant building in Oslo.

It is also a starting point for pilgrimage. Who knows how many have stood here in contemplation before finally setting off, heading north along the Old Kings’ Road, bound for Nidalos Cathedral and the shrine of St Olav, in a city now known as Trondheim. We have no such dreams today, we are simply passing through on a day’s walk around the city.

In the graveyard an anonymous bronze woman has become a focus for hope and tribute. A cheap necklace hangs from her right hand, while at her feet lie a clay bird, two Chinese pencils and a golf ball. Cutting across the grass to the right of the statue a young couple approach the church walls. He seems keener than she does, as if he has brought her here for a lesson of some kind. Resting his hand against the stone he lingers – surprised, perhaps, by how smooth the surface is. She hangs back, waiting for him, as if unsure what she should do next. He turns, walks over and takes her hand, leading her off towards something more familiar.

We continue our walk around the outside of the church. A car drives into the grounds and edges its way along the narrow tarmac path, obliging us to step aside and onto the tended resting place of a long-lived couple. At the wheel a young man, at his side a much older woman, her expression as worn and permanent as churchstone. Mother and son going to visit father’s grave, says Paloma. I nod.

Back again at the front of the church we reach a bench, empty except for a small black-and-white remnant at one end. I walk over and peer into the mug. A dried trace of coffee is all that remains of a moment of rest. Most likely the mug has been left by whoever takes care of the churchyard, by someone who knows that he or she will soon be back. But I am already imagining a pilgrim, a day or so to the north, out there now upon the road. I hear her in my mind’s ear, a Canadian singing a song by a man from across the border. 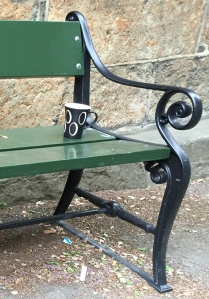 Following on from the Intro and Track 1 that I posted on 20 September, here are the next two tracks on my playlist for the trail.

Shortly before I set off on what would be an 11-week hike from Catalonia to Cornwall I was tipped off to this song via a tweet by the people over at Caught by the River. This infectious slice of modern soul moves at a pace that is just right for walking, and I’ve lost count of the times that it helped me regain my step as I began to falter or wilt as the summer days wore on. The video’s great, too!

Since their formation in 1999, Dalla have led the way in promoting, writing and re-interpreting traditional Cornish music. This tune, Helston, is a furry dance and a musical centrepiece of the St Michael’s Day celebrations that are held each year in the Cornish town of Helston, traditionally on 8 May. In this original arrangement, the clarinet leads us off up the road, while double bass, brass and djembe help to keep us in time. Towards the end, we are reminded that the tune is sometimes known as ‘John the Bone’, with Dalla singing the following refrain against the musical background: John the Bone was marching home, when he met with Sally Brewer, He kissed her once, and he kissed her twice, and he kissed her three times over. Furry dances are meant to be danced by couples in line, so thankfully there were no Helstonians around to watch in dismay as a solitary walker, poles in hand, bobbed his way along the back roads of France.