The day has been overcast, but now, as afternoon drifts towards evening, blades of light are cutting through the thinning cloud at irregular intervals, mottling the sea in real time. In Cornish a single word, glas, can capture the colours of the water, but here, east of the Tamar, at the edge of Torbay, the story of the world is told only in English, and so I need four words to describe what I see: blue, green, pale grey.

How can a language have a single word stand for all these colours? To understand why, imagine the early settlers of a place we now call Cornwall. Where does their eye first fall, what lies in the foreground of their imagination, along whose roads do they come and go? The sea, so first a word for the colour of the sea, undivided, whole. Glas. It then begins to make sense. The sky is the colour of the sea, plants are the colour of the sea, the sea is the reference for interpreting the land.

Scanning the water I spot two patches of darker grey. One of them dissolves again, but the other grows with proximity until it is just a dive’s length from the stone jetty on which I’m standing. I can see the whole of his shape now, a large bull, his flippers extended as he glides to a halt before me. He pushes his head through into my world, snaring me with ebony eyes whose gaze is a lesson in curiosity. I fumble for my phone, desperate to capture the moment, but unwilling to look away. He submerges again, but, to my relief, only to move even closer to the shoreline rocks. He’s head and shoulders above the surface now, looking around, although not at me. I, however, am transfixed by all of him: his mottled belly hanging still in the pellucid water, his twitching snout with its watery snuffles, and his majestic whiskers, the vibrissae without which he would be unable to locate the movement of prey in the deep, dark sea.

He shifts his attention to me once more, locking me with a stare I find unsettling. It is as if he is examining me, peering into my human form in search of a selkie, daring me to shed my borrowed skin and return to the sea. I am released from his spell by the actions of a fisherman further along the jetty. Packing up for the day he casts a couple of fish heads into the water, their plop plop drawing my watcher away. He is a shadow once more, diving for easy prey, all grace and skill, dignifying the sea with his presence.

I linger for a while, expectant, hungry for more, but he’s nowhere to be seen. Time, then, to reel in my dreams and head for home, alone again but for the music in my head, the voice of June Tabor carrying on the tale in song. 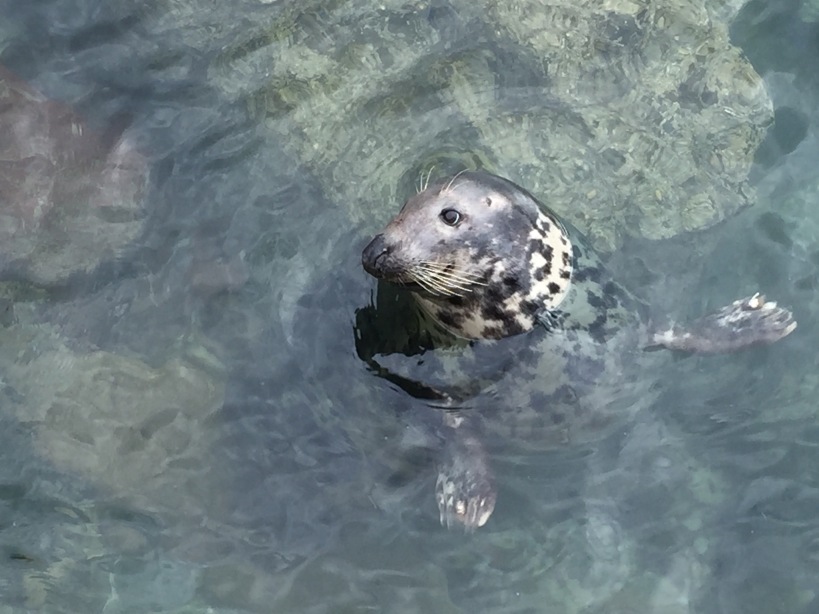 Old bones creak along the trail. Words often elude me at my desk. I can't go on. I'll go on.

8 thoughts on “A Gift From The Sea”